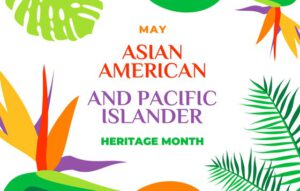 OVERVIEW
Asian Pacific Heritage Month originated in 1978 and the month of May was chosen to commemorate the immigration of the first Japanese person to the United States on May 7, 1843. The month also marks the anniversary of the completion of the transcontinental railroad on May 10, 1869 (the majority of the workers who laid the tracks were Chinese immigrants). To learn more about the origins of Asian Pacific Heritage Month, please see this site.

The Asian and Pacific Islander (API) community has seen a surge of racially-motivated attacks since March 2020 due to racism, xenophobia, and misplaced blame for the cause of the pandemic. stopaapihate.org/ received 3,795 reports of anti-Asian hate incidents from March 19, 2020 to February 28, 2021 and the New York Police Department reported hate crimes driven by anti-Asian sentiment jumped 1,900% in New York in 2020. News coverage of the rise of anti-Asian sentiment has increased exponentially in recent weeks, with corporations, elected officials and celebrites making statements condemning anti-Asian hate. The API community is experiencing an indescribable amount of fear, grief, frustration, and anger whilst channeling these emotions into raising awareness, education, and allyship within the community and among allies.

Against this backdrop, Asian Pacific American Heritage Month is expected to be amplified this year.

Largest wealth gap: A McKinsey & Company report showed that Asian Americans currently have the highest within-group income inequality in the United States. The top 10% of earners had 10.7 times the income of the bottom 10%.

Linguistic diversity: Over 40% of the U.S. population speaks Asian languages – the most common being Vietnamese, Chinese, Korean, Tagalog, Hmong, Nepali and Gujarati.

Overrepresented as essential workers: Among essential healthcare workers (20% of all those on the front lines), 9.2% are Asian Americans, Native Hawaiians, and Pacific Islanders, which is higher relative to their 5.6% representation within the U.S. total population.

CONSIDERATIONS FOR PROGRAMMING AND COMMUNICATIONS

Amplify diverse voices within the API community, particularly Native Hawaiians and Pacific Islanders who are often underrepresented: This month provides a platform to encourage broader understanding of the API community and to drive awareness of history, current events, and a wide range of lived experiences, as awareness is crucial to driving change. As such, this month is an opportunity to collaborate with influential voices, such as API community leaders and activists and to highlight work from API creators as well as colleagues. Ensure that internal and external communications are inclusive of all demographics and experiences of East Asians, Southeast Asians, South Asians, Native Hawaiians and Pacific Islanders.

Provide a platform for open discussion among your employees: This is a time for thoughtful and honest conversations, to listen to others and learn about their experiences, particularly during a time where the API community is being targeted for physical and verbal attacks. Histories and identities among Asians and Pacific Islanders in the U.S. are extremely nuanced. Find ways to provide a safe platform for API employees to share their realities and celebrate their culture with their colleagues.

Celebrate and showcase API achievements: Bring awareness to the contributions the diverse API community has brought to America as well as shed light on accomplishments within your organization and/or in your community. As the model minority myth discourages “taking up space”, this month is an opportunity to recognize, validate and pay homage to contributions by elevating and celebrating these accomplishments.

Commit to continual education and change: Asian Pacific American Heritage Month is only one month in a year. Communicating solely on cultural calendar milestones run the risk of being perceived as performative and inauthentic. Commit to evolving hiring practices and workplace culture by conducting a listening tour and understanding the sentiment of diverse employees on your organization’s diversity, equity and inclusion commitments. Commit resources to encourage and remind teams to continue their API education. Commit to taking action.

HOW TO APPROPRIATELY ADDRESS API AUDIENCES

Directly address the distinct barriers to equal opportunity and justice for API communities: People often view social issues from a subjective point of view, with many wondering what a person did to “deserve” a specific circumstance, such as experiencing hate crimes or losing their main source of income. However, we much be fully aware that history, policies, culture, and many other factors directly contributed to or led to their current reality. Language used in internal and external communications must clearly address that crimes against the API community have always happened – they have merely been exacerbated by, but did not start with, the pandemic.

Be transparent about the trauma of anti-Asian violence: The model minority myth, which holds the belief of greater economic advancement of Asian American individuals versus other emerging majority groups, deeply seeds the perspective that API communities do not experience racism. Therefore, many people have not addressed anti-Asian racism directly due to a continued erasure of API discrimination in the U.S. It is essential for allies to directly address the trauma experience by API communities and to leverage their privilege to acknowledge anti-Asian violence and provide opportunities for impacted individuals’ voices and experiences to be amplified.

Media
We recommend following these reporters and outlets to stay ahead on issues that disproportionately or uniquely impact the API community both in the U.S. and across the globe.

Organizations
There are many organizations whose mission is to advance equity for the API community. A great way to demonstrate support is to partner with these organizations and help advance their mission. While the below offers national nonprofits, Asian Pacific American Heritage Month is a great time to identify local and more issue-specific organizations (e.g., those that are focused on API youth, women, LGBTQ+, sex workers, etc.) to partner with and drive impact in your own backyard in a way that aligns with your organization’s mission, vision and values.

Online Communities and News
These online communities serve as alternative channels for API audiences to stay informed about prominent issues, news and events.